Sandra Bullock, Channing Tatum, and Brad Pitt are all featured players in The Lost City. But who is the biggest star in the movie?

I’ll give you a moment to consider. Is it Bullock, whose range runs the gamut from hit actioners like Speed to Oscar bait like The Blind Side to comedies like The Heat? Channing Tatum, whose work with Steven Soderbergh and the Coens have helped critics and viewers alike see him as more than a pair of washboard abs best known for the dancing series Step Up and the meta comedy 21 Jump Street? Or Brad Pitt, whose global appeal helps get financially dodgy but artistically important movies like 12 Years a Slave produced?

Settled on an answer? That’s right, the biggest star in The Lost City is … Daniel Radcliffe?

It’s a trick answer, as Radcliffe’s victory depends on a fairly narrow definition of “biggest star”: whose films have grossed the most. According to the box-office-tracking website The Numbers, Daniel Radcliffe is, of the four, the one to have grossed the most money domestically: He is the 39th-highest-grossing actor of all time, while Bullock and Pitt are just behind him at 41st and 42nd, respectively. Tatum is a distant 81st. When looking at worldwide grosses, Radcliffe’s lead becomes even more pronounced.

But Radcliffe’s box office total is almost entirely dependent upon the grosses of the Harry Potter franchise, in which he played the title character. Was Radcliffe really the “star” of those films? Or was the titular orphan with the lightning-bolt scar? Isn’t it fair to say that Pitt and Bullock did more to attract moviegoers? But if they did, how can a single character trump all their appeal?

Apologies for this preamble, but the struggle between old-school, personality-and-appearance-driven stardom and franchise-driven stardom of the sort that has propelled Robert Downey Jr., Scarlett Johansson, and Samuel L. Jackson—Iron Man, Black Widow, and Nick Fury, respectively—to the top of the all-time charts is at the heart of Hollywood’s identity crisis.

The Lost City is a throwback to an earlier (and, I would suggest, better) time, one in which high-concept genre filmmaking intersected with the public appetite for beautiful people doing amusing things to create something that entertains us for two hours or so. I found it delightfully charming. And I’m deeply curious to see how the public responds to it. Because if a charming movie like The Lost City can’t attract an audience on opening weekend, the box office is basically doomed. 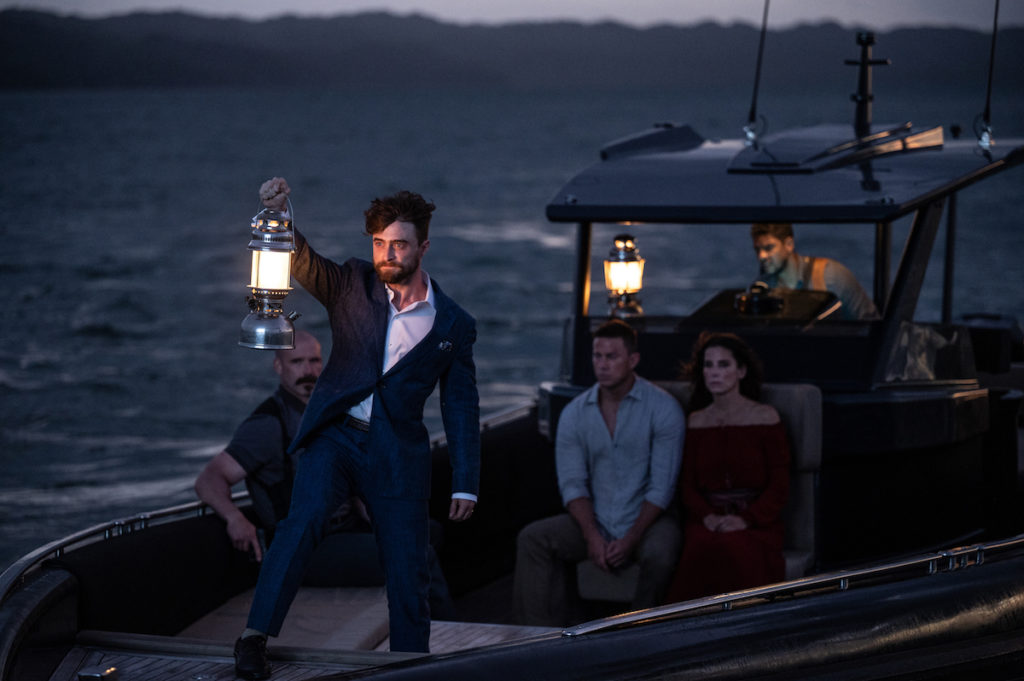 Bullock stars as Loretta Sage, a onetime bestselling romance novelist who, following the death of her archaeologist husband, has lost her groove. She’s finally published what she promises to be the final novel in her series starring Dr. Lovemore, a sort of lady Indiana Jones character, and the buff-and-brainy Dash McMahon, a beefcake modeled on the front of the books by the Fabio-like Alan Caprison (Tatum). Sage can’t wait to be done writing them so she won’t have to deal with Alan any longer.

On the first stop of her book tour, Sage is kidnapped by the black sheep of an eccentric media family, Abigail Fairfax (Radcliffe). Fairfax hopes that the romance novelist can help him find a priceless treasure, given the fact that she has, coincidentally, written about efforts to discover this precise treasure in her most recent novel. Alan hopes to rescue Loretta with the aid of Jack Trainer (Pitt), an ultra-competent extraction artist.

A movie like this lives or dies by the chemistry of its leads, and Bullock and Tatum have that in spades. They’re a delight onscreen together, charming when they’re apart. They have it, whatever “it” is. That undefinable measure of star power that makes us want to watch them onscreen. That’s it. They have it. I would happily watch them make five more of these movies. Or five more movies kinda like them. Whatever. Make it so.

That said: Radcliffe may have been my favorite actor in the movie? Or, at least, he may have delivered my favorite performance as the alternatingly goofy and menacing Abigail; the way he says “coital reverie” while discussing the tawdriness of Sage’s books made me laugh out loud. He’s had a fascinating run of films and TV shows post-Potter, from the guns-bolted-to-his-hands internet troll forced to fight for his life in Jason Lei Howden’s underseen action-comedy Guns Akimbo to his turn as a farting corpse in Swiss Army Man by the directing duo Daniels (the auteurs behind Everything Everywhere All at Once, my favorite film of the year so far). This is a more mainstream movie, naturally, but no less fun than those two turns, and he’s clearly having a blast.

The Lost City is by no means a perfect film; you could lose most of the interludes with Sage’s harried publisher, Beth (Da’Vine Joy Randolph), without missing much. Some of the green-screen work will make you long for the days of painted backdrops. But these are quibbles: this is a fun, and funny, movie. If theaters are to have a future, movies like this must as well. Here’s hoping audiences show up for it.