Looters, rioters, and anarchists should all be condemned as violence undermines legitimate activists.
by Gregg Hurwitz
A protester burns an American flag on September 26, 2020 in Portland, Oregon. Oregon Governor Kate Brown declared a state of emergency prior to Saturday's protest and Proud Boy rally, as fears of political violence between far-right groups and Black Lives Matter protesters grew. (Photo by Nathan Howard/Getty Images)
Share on Facebook Share on Twitter Share via email Print

Since 1994, the majority of domestic attacks and plots in the United States have come from far-right extremists, leaving hundreds of Americans dead. This includes two-thirds of terrorist activity in 2019, and 90% of charted activity so far this year. Yet much of the American conversation remains centered around the violence in Portland and Seattle.

The ratio of airtime to threat is out of whack, and not just because of Fox News and the constant stream of deprecations and exaggerations issuing from Trump’s lips. It’s found fertile ground in the concerns of many reasonable Americans as they consider turning power over to Democrats, whom they believe might bring us back from the chaos of the past four years, but fear will unleash a different–and maybe worse–chaos of civil unrest.

And the Democratic leaders of these cities, in their refusal to stop this violence, haven’t done much to calm these fears.

Portland has seen months of mayhem, numerous fires, millions of dollars in damage to local businesses, and its police force attacked with bottles and rocks.

And up in Seattle, despite Mayor Jenny Durkan’s designation of CHAZ as a “block party” with a “summer of love” vibe, two murders and multiple assaults have taken place there, and citizens are understandably concerned about a zone of anarchy permitted in the center of a US city. The images emerging are downright frightening, scarier yet for the bulk of Americans who lack the resources to move behind gates or summer on the Vineyard if things get sporty in their own neighborhoods.

Just for now, let’s set aside a few of the more obvious arguments of why this type of lawlessness is bad:

Like that it’s immoral and anti-American not to protect our citizens.

Like that it undermines legitimate activists, the overwhelming majority of whom are peaceful, by enabling opponents of change to lump all protest together and thereby dismiss it.

Like that it opens up American citizens to unlawful retaliation from the federal government, which Trump has shown he is only too eager to deploy.

Like that disregarding the rule of law enshrined by the society that you belong to sets a dangerous precedent for other groups you disagree with who will seek to break other laws, many of which will be inconvenient or downright awful for you.

Like that it elicits and encourages a cycle of violence, intimidation, and “retaliation” from the far right.

Like that it costs votes in key states and districts required to hold meaningful power to affect meaningful change.

By its literal definition, civil disobedience cannot be violent or destructive. It is a peaceful breaking of a law–and acceptance of the consequences of breaking that law–in order to bring attention to injustice.

Rioting and looting are not civil disobedience. And in asserting their mob behavior as some sort of virtuous response to injustice, these rioters are glomming onto the Civil Rights imprimatur while doing nothing whatsoever that resembles what the Civil Rights movement did. The looters and anarchists in Portland and Seattle are moral cowards, because in addition to their destructiveness and violence, they completely misunderstand the second half of the civil disobedience equation: you must willingly accept—even seek out—the consequences of your actions.

Civil disobedience demands moral conviction and discipline. If we make it easy, or without consequence, we deprive it of all moral authority. And in so doing we remove from those who claim to fight injustice their right to prove that they are anything more than thugs or opportunists.

If you’re not willing to pay any cost for what you believe, then what’s to differentiate you from those out to make bad trouble instead of John Lewis’s good? What elevates you above an angry Tweet from a celebrity, an Oberlin student demanding academic credit for protesting, or a weekend social justice warrior throwing bricks in a community they don’t have to live in when the cameras are gone and the sun comes up over the wreckage?

It’s a daunting challenge to show an entire populace that your morality is greater than that of their democratically elected government. To succeed, you must be willing to endure whatever comes—arrest, jail, physical suffering, reputational and financial damage—to prove it.

What a terrible, beautiful thing we ask of our agents of change—of our saints. To carry on their shoulders the full weight of the law and to prove the fortitude of their morality by carrying it and carrying it until the sense of injustice and outrage from their fellow citizens becomes undeniable. Until a new awareness dawns and the injustice itself crumbles away, lifeless and defunct, through lawful means.

A mayor who condones violence on his or her watch is essentially saying: “I don’t know history well enough to understand that there are peaceful ways to fix the underlying problems that led to the pain, frustration, and anger of you, my constituents. If I did, I would lay down the privilege of my office to bleed with you on the streets or rot with you in the jails, and at every step of the way we would carry the dignity of those who taught us. So instead I’m gonna sanction some of you to just break shit and hurt people instead. And I’ll say your violence is noble given the weight of your injustice, so I can hide behind your behavior in a way that won’t cost me votes.”

Or to phrase it more succinctly: “For as long as I can I’m going to avoid denouncing your unconscionable behavior, and deter the police from keeping the peace, so that I don’t have to suffer any consequences myself.”

Our leaders should be made of sterner stuff.

To those who argue this is a moral subtlety beneath the clear and present danger Trump poses, it’s one the Democrats would do well to bear in mind as they try to win over tens of millions of voters. They should—they must—be willing to denounce these destructive acts with the same clarity and vehemence as we assume(d) that our President should and must denounce white supremacy.

Again and again this issue of violence has proven to be a simple litmus test for a huge percentage of citizens who might not care to delve into the intricacies of the tax code or the complexities of climate change or the emoluments clause. It’s pretty clear to most that if you’re not willing to hold to legal account those rioters who set fires and throw bricks at cops, you’re neither a brave nor capable leader. Why would anyone want you in charge or their town, their district, or their country? 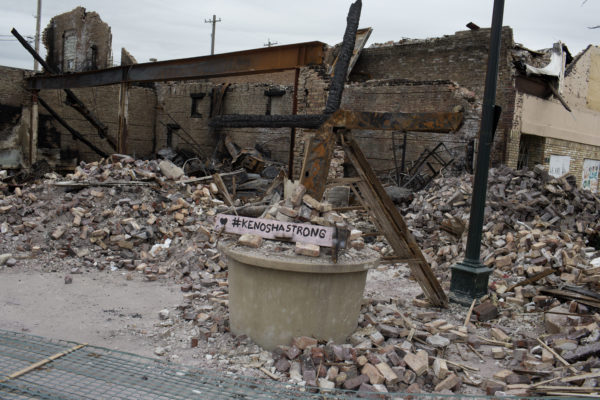