The Redpill Grifter Who Became an Anti-Ukraine Propagandist

Last week, on April 21, Scott Ritter—whom older readers might remember as a former U.N. weapons inspector turned ferocious foe of American and Western foreign policy—posted an angry screed on RT.com (the web version of what’s left of the propaganda outlet Russia Today) ringing the alarm about the disappearance of Gonzalo Lira, a Chilean-American pro-Russia “social media influencer” and video blogger based in Kharkiv, Ukraine. Lira had not been heard from since April 15 and had even missed a scheduled appearance on a show hosted by George Galloway, the far-left former British member of Parliament and fellow RT personality who has never met an anti-Western tyrant he didn’t like. Ritter dramatically revealed that “Gonzo” Lira had expressed concern that the authorities in Kyiv were “looking for him” and noted that Volodymyr Zelensky had recently promised “consequences for collaborators.” “And now,” Ritter continued ominously, “Gonzo Lira had gone missing”—presumably a victim of kidnapping, torture, and likely murder by the Ukrainian Nazis.

Ritter went on to blast the West’s double standards. Look at all the outrage when Belarus detains a blogger! Look at the indignation at the horrific murder of Jamal Khashoggi, the Saudi journalist and dissident! And yet in this case, nothing:

To remain silent in the murder of Gonzo Lira is to be complicit in his possible death, and the deaths of all journalists who pursue the truth, even if it runs counter to the mainstream narrative. Critical thinking should not be a death sentence. Unfortunately for Gonzo Lira, it seems it was.

Ritter did hedge a bit on the murder, noting that he had cautioned on Telegram one day earlier that he had “no direct evidence that Gonzalo has been killed” and that he simply wanted to “raise awareness” about his disappearance. However, he added that “Gonzo said any disappearance of more than 12 hours should be treated as if something bad had happened to him.”

Meanwhile, also on April 21, the Russian Ministry of Foreign Affairs posted an “opinion” by ministry spokeswoman Maria Zakharova that referred to Lira as a “famous film director,” praised his reports on “the Nazis’ atrocities,” deplored his disappearance, and took a swipe at “liberal ‘queers’ and ‘honest’ Western journalists” who were joining the “neo-Nazis” in supposedly celebrating Lira’s murder. (That was a reference to transgender journalist Sarah Ashton-Cirillo, who had tweeted a couple of days earlier that Lira had been “captured” by Ukrainian security services on charges of being a Russian spy and saboteur posing as a journalist.) Screenshots of Zakharova’s text were boosted on Twitter by trollish Columbia University academic and ultra-isolationist Richard Hanania, who commented gleefully on “the current Nazi-transgender alliance in favor of disappearing journalists.”

But the very next day, Gonzalo Lira resurfaced, looking hale and hearty, saying that he had been detained by the Ukrainian security service, the SBU, and was “okay physically” but “a little rattled.”

So much for his martyrdom.

Lira’s output is pretty much what you’d expect:

His writings also include other things that aren’t particularly surprising on the pro-Russian side of the culture wars. For instance, Lira is a rabid anti-vaxxer and COVID denier who thinks that the vaccine is an “experimental bioweapon”; that modern-day Western democracies are the real tyrannies (after all, it’s not as if “Qaddafi, Hussein, and Assad forced all their people to take experimental vaccines to make Big Pharma obscene profits”!); and that if you got vaccinated “you now have AIDS confirmed” because the vaccine causes “immune erosion.”

But there is still more: for instance, the day before he was apparently grabbed by the SBU, Lira made a post to his Telegram account sharing some deep thoughts from the infamous /pol/ (“politically incorrect”) board of the 4Chan website—a cesspool of anti-Semitism, racism and misogyny that makes Gab look pleasant—and adding an appreciative “LMAO.” 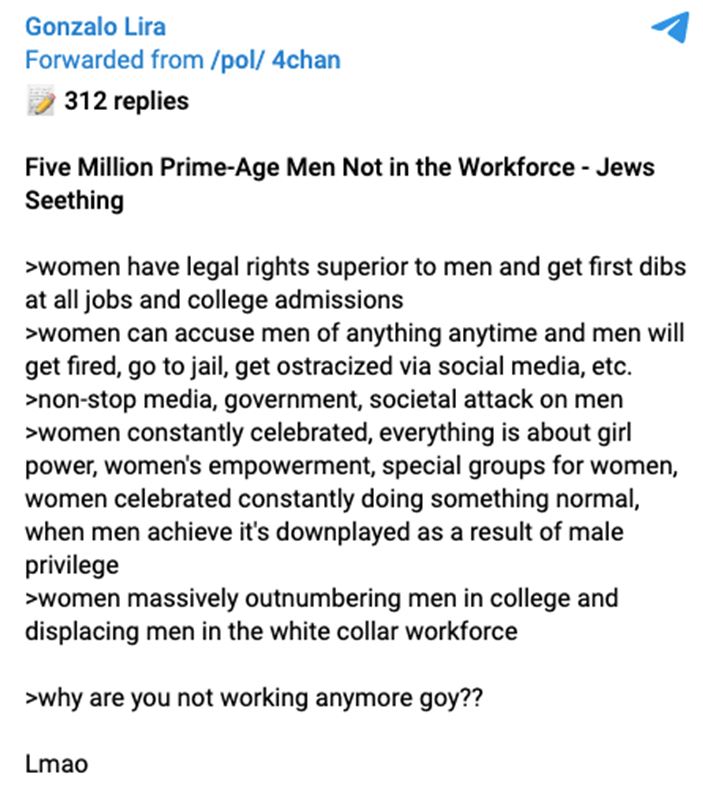 The anti-Semitism is far from an isolated instance. Another /pol/ repost last November, shared with Lira’s comment, “Something I came across—what do you all think,” argues that if the Holocaust was real and the Allies really did save the Jews from the Nazis, Jews should be eternally grateful to white men; but since they constantly revile white people and “openly encourage non-Whites and non-gentiles to destroy their society and culture,” this means that either Jews are odiously ungrateful to their liberators and “Hitler was right,” or the Holocaust is “just propaganda and lies.” (Not surprisingly, Lira’s YouTube videos tend to draw a certain kind of person: the chat sections of his YouTube livestreams are full of such comments as, “Ukraine had a Jew coup,” “Oligarch = Jew,” and “(((Victoria Nuland)))” or “Victoria Kikeland” in reference to the Obama and Biden administration official who supposedly helped engineer the 2014 revolution in Ukraine.)

The misogyny is not incidental, either. A March 21 Daily Beast feature reveals that before 54-year-old, California-born Lira was an intrepid “journalist” reporting from the Ukrainian war zone, he was a dating and life skills guru known as “Coach Red Pill.” (Before that, he had tried his hand at fiction writing and indie filmmaking, then got into the “alternative media” via Zero Hedge, the controversial financial blog that doubles as a far-right, pro-Kremlin conspiracy theory site.)

“Red Pill” is, of course, a popular term in anti-establishment Internet circles, based on The Matrix, that refers to opening one’s eyes to supposed hidden truths the powers that be don’t want us to know. Perhaps its most common usage refers to an ultra-reactionary and frankly misogynistic perspective on gender based on a very crude version of pop evolutionary psychology, which holds that sexual equality is a delusion and female liberation is a product of modern Western degeneracy. While Lira has scrubbed his dating-coach material from his YouTube channel after turning to war reporting, the Daily Beast has the receipts, which include a 2020 video advising men to “never date a woman in her thirties” since a single, childless woman past 30 is a degenerate slut who is about to succumb to “baby rabies” and will do anything to trick a man into marriage.

Obviously, Lira’s repugnant beliefs don’t mean that he should be tortured or killed—which, obviously, he wasn’t. Some have even suggested that he faked his own disappearance as an attention-seeking ploy.

But assuming that Lira really was picked up and held for questioning by the SBU, is there much of a cause for outrage? When you’re a foreigner living in a country battling a foreign invasion and you’re basically churning out full-time propaganda for the invader, I would say you’re fair game not only for arrest but for deportation as well. Amusingly, a solid and scathing debunking of the Lira victimhood narrative is offered in a video by Conor Clyne, a fellow dating and seduction guru with “red pill” leanings—but with a strongly pro-Ukraine outlook.

The chorus of lamentations over Lira’s disappearance (which included not only Ritter and Zakharova but compulsive West-hater Max Blumenthal) turned out to be wasted. The good part about the attention he got, though, was that it offers a useful glimpse of the kind of Westerner who ends up in the pro-Kremlin camp: a conspiracy theorist who hates Western liberalism for empowering women and thinks white men are oppressed and exploited by sluts and Jews.