The Republican Party Is Trump Steaks

Like the other Trump schemes—airlines, steaks, board game, university, magic pills, magazine, etc. etc. etc…—from the jump TRUTH had all the marks of a media buzz Potemkin Village that allows the first family of grift to cash in, but doesn’t deliver anything of value to the marks who got swept up in the hype.

In the past few weeks that blindingly obvious assessment became stark reality, as the reports piled up about the site’s “emptiness,” that MAGA power users are not flocking to it and how the Trump family isn’t even tweeting (tooting? truthing?) on their own platform. This week two key “executives” charged with actually, you know, building the technology quit, without even creating an app for Android phones. The Daily Beast reported some disastrous analytics which showed the site performing worse than social media behemoths like “Wizz,” “Bloomer-random video chat,” and “Eggplant Roulette.” (Only one of those sites is made-up).

As a standalone the story of Trump launching a failing business that screws people over doesn’t really get my fingers tapping. That’s a dog-with-dentures-bites-man tale if there ever were one.

What is interesting, and underappreciated, is just how bought in the entire Republican party infrastructure has been on promoting the former president’s latest bunco scheme.

Because the most fervent advocates for this scam have not been the Trump kids or even the DWAC SPAC employees—but rather the official organs of one of our nation’s two major political parties.

“What do you want your username to be on Trump’s new app? Hurry!”

This urgent missive was one of dozens upon dozens of fundraising emails and texts I received from the Republican National Committee and other official Republican political organizations over the past few months providing pro-bono promotion for TRUTH Social.

In this instance the RNC was requesting that I tell them my TRUTH username (N.B. It’s @FredDidNotLoveYou). The committee then asked me to pitch in a few bucks to show that I STAND WITH TRUMP, conveniently pre-checking a box that would make said donation recurring and warning that if I unchecked I would not be doing my part to SECURE TRUMP’S LEGACY.

I declined to reply.

My demurral did not please Ronna “Don’t Call Me Romney” McDaniel. Just eight hours later I received another stalkerish email from her committee with the subject line: “We’ve been trying to reach you”

This time they wanted me to “PLEDGE” that I will register for TRUTH Social—which is a bit culty if you ask me. Is this an app or a religious sect? The RNC was “counting on me to take the pledge before it’s too late.”

Mind you, these notes came on March 31st, well after it was clear that Trump’s site was a mirage, JVL told you as much in the first week of December. Nonetheless the party’s demands that I sign a blood loyalty oath to the site was preceded by similarly urgent requests on March 29, March 28, March 24, March 18, and March 15.

That’s right, I received seven emails from the RNC promoting Donald Trump’s social media in the span of two weeks. I don’t talk to my mother that much.

But it turns out this was just the moment when I started noticing them. An inbox search reveals the Truth Social emails had been coming since before Halloween.

And they said it was Liz Cheney who couldn’t move on.

But it’s not just Ronna who is giving TRUTH the SWF treatment. Basically every GOP committee—and scores of politicians—have been complicit in promoting Trump’s latest get rich quick scam.

Kevin McCarthy’s SuperPAC, the Congressional Leadership Fund, emailed with the same offer as the RNC, claiming that recipients could “choose their username” on TRUTH, despite there being no formal relationship between the organizations. Meanwhile the National Republican Congressional Committee—the campaign arm McCarthy oversees—was running ads that literally said they were BEGGING people to support Trump’s social site. 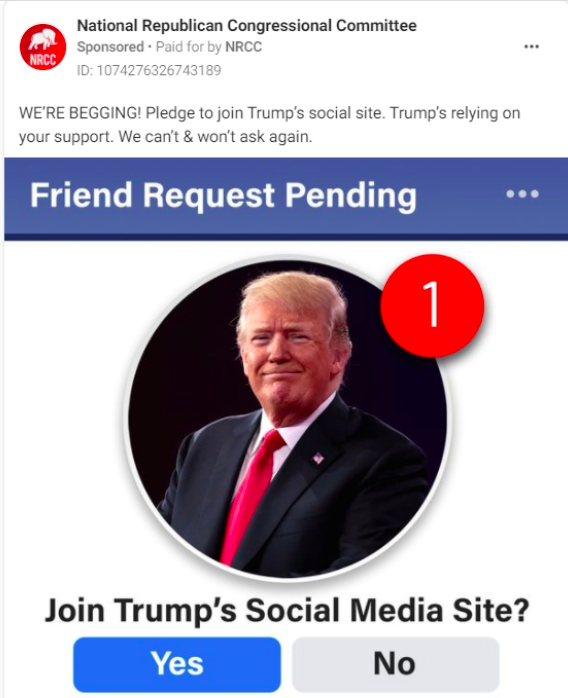 Over on the Senate side the shell game was even worse. This week Senate Majority Leader Mitch McConnell claimed he thought that GOP candidates’ opinion about former President Trump should be “irrelevant.” If that’s the case he should probably connect with the committee he has charged with running Senate campaigns because the National Republican Senatorial Committee email list reads like that of a besotted Trump superfan demanding others share their complete and total allegiance to Dear Leader.

On February 27 the committee sent out an email with a Double Siren subject line. This emergency message falsely claimed Truth Social was the #1 app on app stores and then told supporters that the NRSC was making a list of True Patriots who signed up for the website and that they would be sharing the list with the former president. 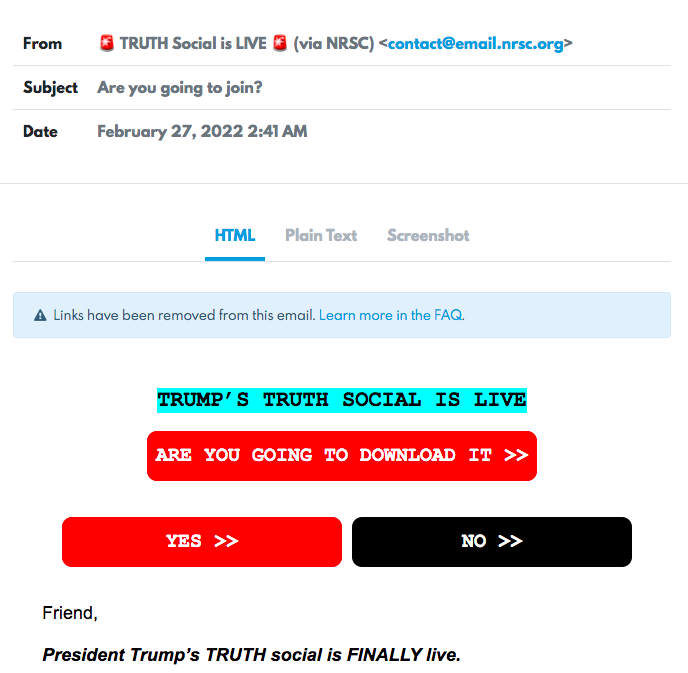 If you were an average Joe on the NRSC’s list you might be forgiven for thinking that signing up for TRUTH was the most important issue in America. Mitch McConnell has turned the campaign committee he is responsible for into a chop shop with a relentless commitment to the promotion of an insurrectionist arsonist’s self-enriching scam company.

It’s not just the campaign committees.

Fischer was multi-platform, sending emails inviting people to join the “1 Million Club” of True Trump Patriots who agreed to sign up for the site. Marsha Blackburn, writing under the nom de plume “Pelosi For Never” emailed supporters to say that her “goal is to add 500 NEW Patriots to [Truth Social] in the next 5 minutes.”

Back in December, Marco Rubio sent me this ominous text: 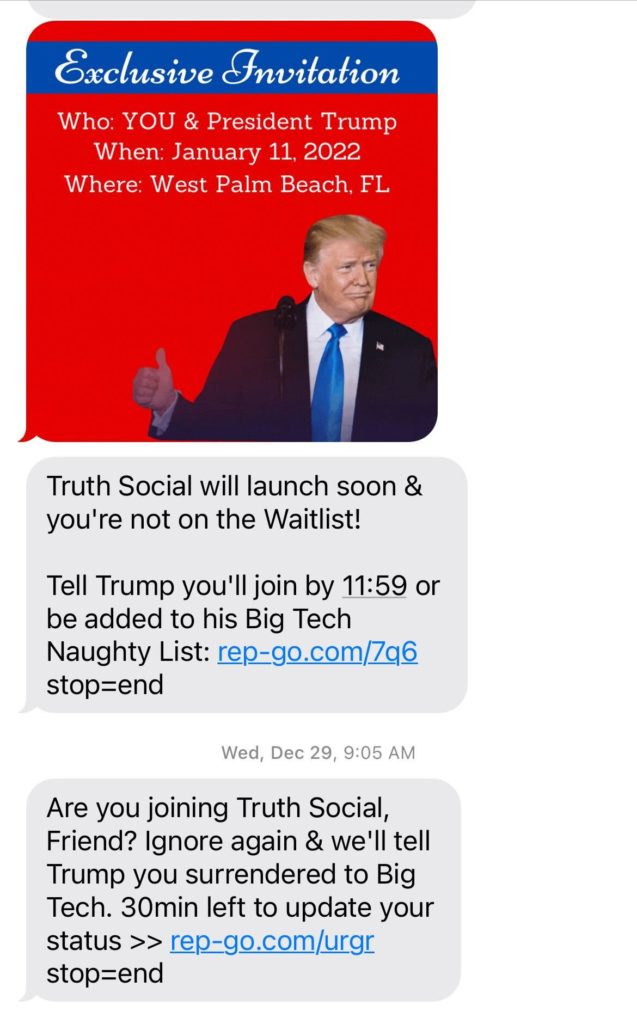 Now for a friend, I thought that was a pretty rude threat. A few weeks later Marco texted again. He was once again asking whether I planned to accept Trump’s friend request on TRUTH Social. When I clicked to let him know that I did not, in fact, want to be a treasonous ass pimple’s friend on a fake website, I found out that mi amigo Marco just wanted me to donate $35 to verify that my friendship with Trump was as strong as his is.

I don’t need to pay for small-handed action, but do what ya gotta do Lil’ Marco.

At this point, you get the gist.

If I detailed every text, tweet, email, Facebook ad, Telegram post, and Gettr regeet sent by Republicans to promote TRUTH social this article would be longer than a Trump bankruptcy filing.

An official political party doing this much PR for one of their leader’s private enterprises would be gross under any circumstances.

But in this case the party is not just corrupt and double dealing.

And not just rehabbing a man who attempted to end our democracy.

No sir. They are knowingly misleading their own supporters in service to a complete swindle run by a crook.

The entire party has turned into one big off-shore call center trying to trick granny into handing over their credit card number to pay for some phony life insurance.

Or put another way:

And if you don’t pledge to sign up for their grift TODAY, they are going to have no choice but to revoke your patriot card and tell Mr. Trump that you are no longer part of the club. 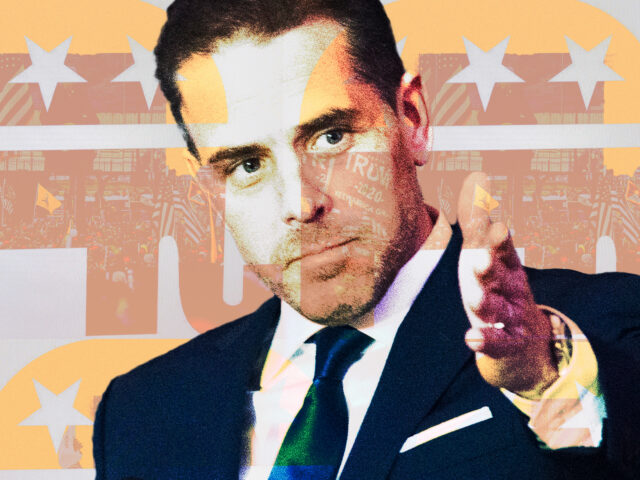