The Jericho March may have shut down after the insurrection but its ideas and members haven’t gone away.
by Thomas Lecaque
Supporters of U.S. President Donald Trump pray outside the U.S. Capitol January 06, 2021 in Washington, DC. Congress will hold a joint session today to ratify President-elect Joe Biden's 306-232 Electoral College win over President Donald Trump. A group of Republican senators have said they will reject the Electoral College votes of several states unless Congress appoints a commission to audit the election results. (Photo by Win McNamee/Getty Images)
Share on Facebook Share on Twitter Share via email Print

An underappreciated aspect of last year’s insurrectionist mob attack at the U.S. Capitol is its religiosity. The involvement of conspiracy-minded QAnon adherents was vividly on display as the insurrection was televised live, and the participation of extremist political groups like the Proud Boys and Oath Keepers has been widely reported. But less obvious and less well understood is the extent to which Christian groups played a part in the day’s events—groups like the Jericho March, one of several prominent efforts to bring Trump supporters to the nation’s capital on January 6th.

The term “Jericho march” or “Jericho walk” has been used off and on over the last few decades by Christian groups protesting in support of social and political goals. Sometimes the causes are liberal (as in these 1990 Jericho marches for racial reconciliation or this 2020 Jericho march in Texas following the killing of George Floyd) and sometimes conservative (as in the many anti-abortion Jericho marches). The inspiration for the term is the destruction of Jericho in Joshua 6:1-25, when Israelite warriors marched around the city seven times as shofars (ram horns) were blown and the Ark of the Covenant was carried in procession. The story was adapted into the famous slave spiritual “Joshua Fit the Battle of Jericho,” although the song leaves out that when the walls came a-tumblin’ down, the warriors “devoted to destruction by the edge of the sword all in the city, both men and women, young and old, oxen, sheep, and donkeys,” and, “burned down the city, and everything in it.”

In late 2020, the name Jericho March was adopted—and claimed as an unregistered trademark, even though it had been widely used for many years—by a new pro-Trump group. The chief organizers were Robert M. Weaver, a onetime Trump administration nominee for director of the Indian Health Service, and Arina Grossu, a low-level Trump administration appointee in communications. Here are Weaver and Grossu dropping biblical allusions in a November 25, 2020 press release:

“Just as the Israelites circled the walls of Jericho until the walls fell, so we use peaceful means of protest until truth, transparency and justice prevail,” stated Weaver. “What’s at stake is the future of free and fair elections in our Republic. We seek true election reform to protect our American freedoms and the integrity of our election process. We believe that God has blessed America and will continue to bless her, if our people remain faithful to God’s call to holiness and repentance,” Weaver concluded.

“It is time for the people of God to activate in unprecedented ways. We have stayed silent for too long, but now the Church is rising up. Our God is mightier than any earthly power and He can restore truth and justice,” said Grossu. “This is also God’s call to unity in our Church. We are diverse in our Judeo-Christian beliefs and expressions, yet we come as one with childlike faith and trust in authentic worship of the One True God.”

They also wrote that, “The Jericho March™ is biblically-focused on Joshua 6. Jericho was a city of false gods and corruption. Just as Joshua was instructed to march around the walls of Jericho seven times, Jericho Marchers™ pray, fast, and march at a specific place and time until darkness is exposed and the walls of corruption fall down.”

Weaver and Grossu’s group was active in the weeks between the 2020 election and the insurrection, most prominently on Dec. 12, 2020, when it held a “Let the Church ROAR!” rally in Washington, D.C., featuring Michael Flynn’s first public appearance after his pardon by Trump. “Don’t get bent out of shape,” Flynn said of the election results. “There are still avenues. . . . We’re fighting with faith, and we’re fighting with courage.” In keeping with the Jericho theme, the rally featured the blowing of shofars, comparisons to the last days, and speakers who could be considered prophetic visionaries. Alex Jones, the conspiracy theorist, was there. So was Archbishop Carlo Maria Viganò (who has become progressively more QAnon-adjacent).

Even many writers associated with the political right described the Dec. 12 rally as bizarre and dangerous:

I do not believe these are days for mincing words. I’m 63 1/2 years old & I have never seen anything in these United States of America I found more astonishingly seductive & dangerous to the saints of God than Trumpism. This Christian nationalism is not of God. Move back from it.

Three weeks later, the Jericho March returned to Washington, calling on “patriots, people of faith and all those who want to take back America” to blow shofars while marching around the Supreme Court building seven times at noon on Tuesday, January 5, and then the Capitol at noon on Wednesday, January 6th. And after re-enacting the Book of Joshua, when the walls of the Capitol didn’t come down, Trump’s supporters decided to go over them instead—carrying the Biblical passages to their logical and theological conclusion by storming Congress.

We have no way of knowing how many of the people who invaded the Capitol on January 6, 2020 were Jericho Marchers; unlike with the Proud Boys and the Oath Keepers, there seems to be no explicit mention of the Jericho March in the complaints and indictments filed so far by the Justice Department against the Capitol attackers. We do know that someone from the group’s leadership was that day approvingly tweeting pictures of protesters who had broken through barricades, overrun the police, and climbed all over the West Front of the Capitol.

After Jan. 6th, the group locked its Twitter account and shut down its website, as the organizers presumably realized that aiding in insurrection carried more consequences than they, personally, wanted to bear. The Jericho March homepage now shows just two statements, both released in the days after the attack, claiming that the group had “a history of totally peaceful marches” for “election integrity” and that its aim was to be “a peaceful prayer march where people of Judeo-Christian faith pray together, sing songs, and blow shofars.” But the Internet Archive mirror of the group’s Twitter account and homepage as they appeared on Jan. 6th reveal not a religious group that happens to have some political concerns it intends to express peacefully but an explicitly pro-Trump organization that bought into his Big Lie about the election and was raring for action—as witness this prominent banner: 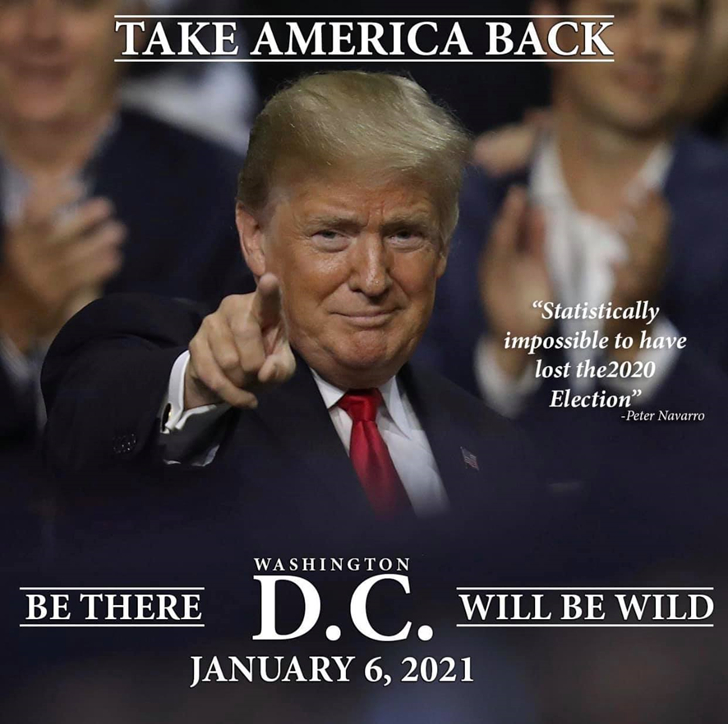 As Emma Green noted in a short Atlantic article that deftly described the Jericho March’s intentions:

The Jericho March is evidence that Donald Trump has bent elements of American Christianity to his will, and that many Christians have obligingly remade their faith in his image. Defiant masses literally broke down the walls of government, some believing they were marching under Jesus’s banner to implement God’s will to keep Trump in the White House.

Of course, the Jericho March was not the only religious group participating in the events of Jan. 6th; other Christian nationalists flocked to Washington as well in support of Trump. And the fact that the organizers of the Jericho March went dark after Jan. 6th hasn’t stopped their ideology and their adherents from carrying on. This past November, Michael Flynn, sitting alongside Alex Jones and Mike Lindell, called for a single religion in America. (All three men were speakers at the Dec. 12, 2020 Jericho March rally.) Flynn has also apparently espoused the views of a murderous white supremacist and has worked to stitch together prophetic, apocalyptic, and other extremist Christian groups into a broad coalition.

Meanwhile, another speaker at the Dec. 12, 2020 Jericho March rally, Pastor Kevin Jessip, continues to push apocalyptic rhetoric and is planning “a major intercessory prayer event” in Plant City, Florida, for January 8, 2022—choosing 1/8 in reflection of Exodus 1:8, Deuteronomy 1:8, and Acts 1:8, representing a move from oppression to God’s promise to being empowered by God. And other prominent Jericho Marchers, such as Eric Metaxas and Greg Locke, have become leading Christian anti-vaxers, having moved from one major lie to another.

And what about the Jericho March’s two main organizers? Arina Grossu is now a bioethics commentator and a fellow at the Discovery Institute—the conservative think tank known for having pushed for the teaching of “intelligent design” in schools.

And Robert M. Weaver seems to have joined Sidney Powell’s “Defending the Republic” nonprofit as its chief financial officer but quit in early April 2021. (The nonprofit was designed to help Powell’s mad quest to overturn the election.) Late last month, a filing from a group called the America Project listed Weaver as its chief financial officer. Its chief aim seems to be helping Patrick Byrne—Overstock founder, conspiracy theorist, and funder of the Cyber Ninjas, the company conducting the farcical Arizona audits—continue to push Trump’s Big Lie.

It is easy to take a website offline. It is easy to act as though something unpleasant is an aberration, as the Jericho March organizers have claimed that the violence of January 6th was. But there is another way of looking at the group’s role in what happened that day: A coalition of evangelical and Catholic extremists claiming to be “prophetically inspired” and naming itself for one of the most bloodthirsty passage in the Bible decided, on the basis of lies, to wage holy war against the American Republic.

Meanwhile, reporters and historians should continue to probe the role of religion in the attack of Jan. 6th. (The new website UncivilReligion.org, filled with disturbing images from and essays about that day, is an excellent starting place.) This is a matter not only of journalistic and academic interest but of potentially urgent interest to the future of our democracy—after all, the group may be gone, but its members haven’t gone anywhere.