Keep up with your favorite Bulwark writers—sign up for a FREE daily dose of sanity emailed right to your inbox. Sign up here.
Support The Bulwark and subscribe today.
Join Now
Impeachment

His lawyers’ everybody-does-it argument doesn’t exonerate him—but it does remind us of the importance of rejecting such rhetoric.
by Adam J. White
In this screenshot from Congress.gov, defense attorney David Schoen speaks on the fourth day of former President Donald Trump’s second impeachment trial at the U.S. Capitol on February 12, 2021 in Washington, D.C. (Congress.gov / Getty)
Share on Facebook Share on Twitter Share via email Print

“Thus, then, by the operation of this mobocratic spirit, which all must admit, is now abroad in the land, the strongest bulwark of any Government, and particularly of those constituted like ours, may effectually be broken down and destroyed.”
—Abraham Lincoln, 1838

In aggressively defending his impeached client on Friday, Michael van der Veen said many false things—but also one crucial truth: Donald Trump is not the only politician who revels in violent political rhetoric, who excuses or invites political violence. Some people, such as van der Veen, think that this exonerates Trump, but in fact it is a reason to convict him. After years of politicians playing with fire, one of them finally sparked an inferno. This is the moment for senators—for all of us—to begin re-establishing the basic norms of politics necessary to sustain our Constitution.

The former president’s lawyers took some of his words from January 6 and declared them normal:

Consider the language that the House impeachment article alleges to constitute incitement: “If you don’t fight like hell, you’re not going to have a country anymore.” This is ordinary political rhetoric that is virtually indistinguishable from the language that has been used by people across the political spectrum for hundreds of years.

He had a point. Those particular words from President Trump sound all too familiar in modern politics, as van der Veen and his colleagues went on to demonstrate with video montages of Democratic politicians: Speaker Nancy Pelosi encouraging “uprisings all over the country,” Rep. Ayanna Pressley calling for “unrest in the streets,” and many other politicians and public figures joking about punching Donald Trump in the face, or even assassinating him.

Of course, distinctions must be made among different kinds of rhetoric. As the historian Joanne Freeman, who literally wrote the book on violence in Congress, observed, context matters:

Historians will tell you, folks:

Every use of the word “fight” is not the same.

Who said it?
Why?
In what context?
For what reason?

That stuff matters, you nonsensical nimwits.

This is why some of the examples that Trump’s lawyers offered fall flat. No one took Joe Biden’s campaign slogan, “A Battle for the Soul of This Nation,” to be a literal call to “battle.” But even Biden, who often bragged about wanting to beat up Trump “behind the gym,” sometimes crossed lines.

In terms of both violent political rhetoric and actual political violence, politicians and pundits in recent years have raised temperatures and lowered standards. And so today we see members of Congress and other politicians, over and over again, either using violent rhetoric recklessly or excusing (and thus encouraging) actual violence—from excusing the violent episodes during the summer 2020 protests to encouraging their followers to accost officeholders in public or in their homes.

In such rhetoric, our political leaders cast struck matches on the ground. Most of the time nothing has happened. Other times, the flames that erupted—from lives lost or property destroyed in protests to assassination attempts on members of Congress—were sufficiently distant in time and place from the incendiary rhetoric to give politicians plausible deniability. But on January 6, the connection became virtually impossible to ignore: President Trump and his supporters, after months of reinforcing the big lie of a “stolen” election, gathered a mob in Washington, sent it to the Capitol, and then let all hell break loose.

We are lucky that more violence has not erupted around our politics in recent years—though it is hard to ascribe “luck” to the fact that we’ve only seen the Capitol ransacked, city neighborhoods burned, and congressmen shot. Still, for all the struck matches that have been strewn about, it could have been worse.

But it will get worse, for reasons that Abraham Lincoln forewarned in his 1838 address to the Young Men’s Lyceum of Springfield, Illinois. The more our politics abides even small instances of the “mobocratic spirit,” the more that other Americans will see their own attachment to the Constitution and their faith in the rule of law corroded, while the wrongdoers find their own cynicism rewarded.

“By such examples,” Lincoln warned, “by instances of the perpetrators of such acts going unpunished, the lawless in spirit, are encouraged to become lawless in practice; and having been used to no restraint, but dread of punishment, they thus become, absolutely unrestrained.” Eventually even law-abiding, public-spirited citizens will grow faithless and cynical: “seeing nothing in prospect that forebodes a change for the better,” they “become tired of, and disgusted with, a Government that offers them no protection; and are not much averse to a change in which they imagine they have nothing to lose.”

President Trump’s words and actions, culminating on January 6, are the most prominent example of this worst part of our anti-constitutional politics. They merit impeachment and conviction. But his lawyers urge the senators to excuse him because other politicians’ rhetoric has been excused. They want us to accept that we have defined deviancy down.

When Senator Daniel Patrick Moynihan coined that phrase, he observed that conservatives had been “sensitive to downward redefining that weakens societal standards.” Today, however, conservatives who support President Trump gladly accept those ever-lower standards as the proper measure of Trump’s conduct, instead of recognizing that his conduct proves precisely why constitutional self-government requires much more.

To impeach President Trump for stirring up a mob to menace our constitutional institutions, and then to convict the now-former president for it, would provide history with our generation’s clear denunciation of political rhetoric that plays with violence. And going forward, it would be the point of reference against which violent political rhetoric and political violence will be judged. Politicians who might otherwise feel comfortable calling for “uprisings,” or “unrest in the street,” will find themselves compared to President Trump—and rightly so.

On ‘Hatred’ and the Trump Impeachment

The 10 Worst Moments from Trump’s “Defense” 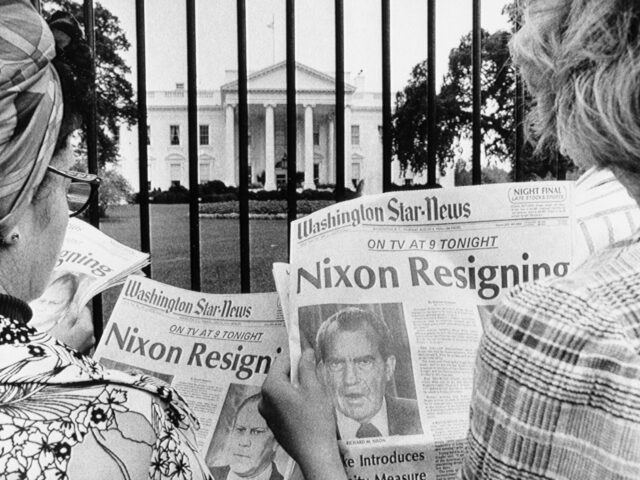 What Good Is Impeachment, Anyway?