Top Gun undoubtedly has its pleasures, but it is not a “good” movie in the traditional sense of the term. Yes, it’s pleasing to the eye—how could it not be with the movie-star good looks of Tom Cruise and Val Kilmer, their smiles gleaming as brightly as the military hardware almost pornographically on display in Tony Scott’s steamy red-and-orange haze? But everything that occurs away from the airplanes is, well, perfunctory at best, horribly corny at worst.

What Top Gun: Maverick asks, then, is this: “What would Top Gun look like if it were, y’know, a good movie?”

Joseph Kosinski is a more-than-adequate replacement for the dearly departed Scott. Say what you will about the plotting of his Tron: Legacy and Oblivion—the first is borderline incoherent; the second cobbled together from spare parts of every big sci-fi movie from the 20 years that preceded it—but they’re visually and aurally stunning, a near-perfect merging of sight and sound.

He is working from a script rewritten by Christopher McQuarrie, the Oscar-winning screenwriter of The Usual Suspects. Over the last 15 years or so, McQuarrie has served as Tom Cruise’s amanuensis, earning screenplay credits by channeling the star’s persona into Valkyrie, Jack Reacher, Edge of Tomorrow, and The Mummy in addition to serving as the writer-director on the four final Mission: Impossible movies (the last two of which are to debut in 2023 and 2024). Few screenwriters currently working have a better intuitive grasp of how to meld plot, action, and stakes that are simultaneously generically large and intimately personal.

The talents on display here—Cruise, Kosinski, and McQuarrie—have combined to create something that is both tremendously entertaining and manages the rare trick of capitalizing on nostalgia while improving upon the source material.

Just for starters: Top Gun: Maverick has an actual plot with actual stakes beyond “Who’s going to get their name on the Top Gun plaque?” Following the semi-successful test flight of a super-plane capable of hitting Mach 10, Captain Pete “Maverick” Mitchell (Cruise) is sent back to Navy Fighters Weapon School to instruct a collection of past winners on how to achieve a nigh on impossible task.

The Enemy—the most specific designation we or they are given as to the actual foe here, a term that somehow manages to be even more generic than the invocation of “MiG” in the original—has constructed an illegal uranium-enrichment plant and NATO has authorized a mission to blow it up. That mission consists of making a high-speed run through a steep-walled valley lined with surface-to-air missiles, meaning that the planes must hug the ground on their approach. Then there’s a vertical mountain climb followed by a precipitous, twisting dive into the bombing run, where two pairs of pilots will have to make consecutive Death Star-style miracle shots on a vent about three meters wide before climbing out again at 10 g’s, evading stray fighters and the SAM batteries all the way back to the aircraft carrier.

Again, this couldn’t really be more generic, but at least it gives Mitchell and his band of wards—including Rooster (Miles Teller, who was born the year after the original was released), the son of Mitchell’s old backseat pilot, Goose; the hotshot Hangman (Glen Powell); and, shaking things up a bit, the lady-aviator Phoenix (Monica Barbaro)—something meaningful to achieve while Mitchell works out his various hangups. Can he reconcile with Rooster, whose career he stalled in an effort to keep him out of the sky? Can he settle down with Penny (Jennifer Connelly) and start the family that has eluded him these last four decades?

Basically: On this magical strip of land known as Fightertown, USA, can he make peace with what haunts him in his life?

Which brings me to a theory that is slightly spoiler-y, so I will place it after these stills of people from the movie looking stylish next to amazing military hardware. 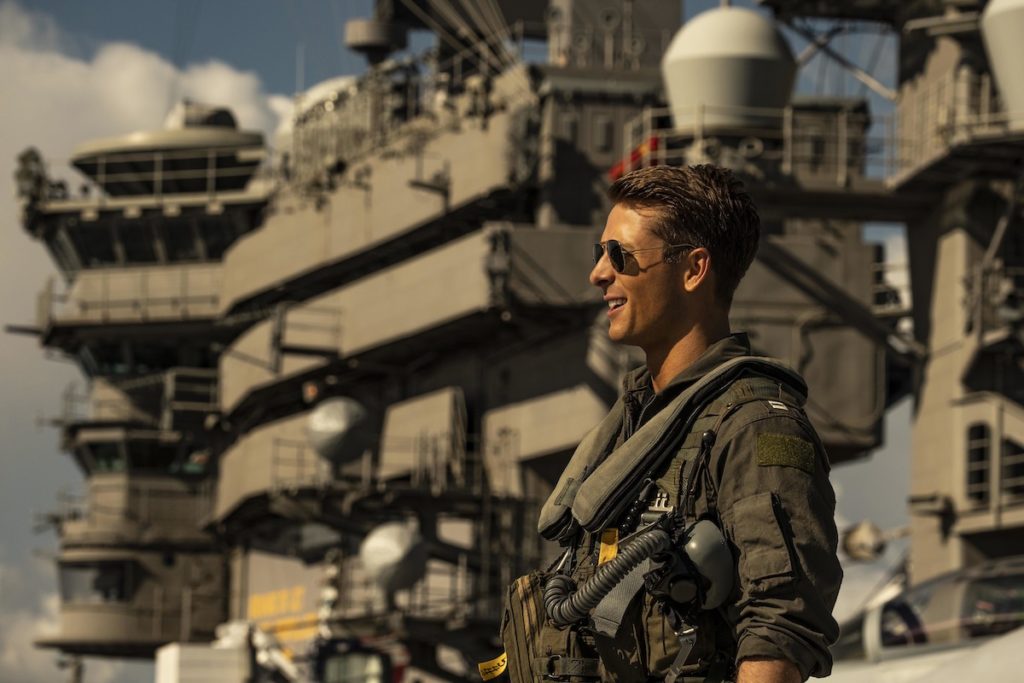 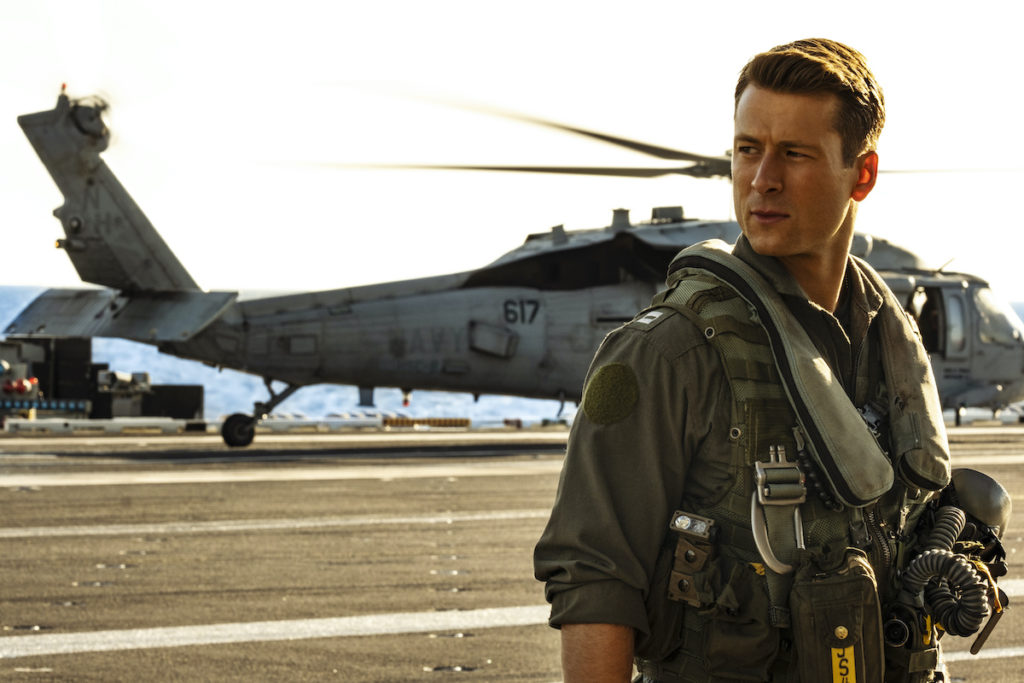 In the film’s opening sequence, right after Maverick hits Mach 10 and his guys on the ground breathlessly mutter “he’s the fastest man alive,” something goes wrong. Mav pushes things just a bit too far, nudging it to 10.1, at which point it begins speeding up on its own, past Mach 10.1 to Mach 10.2, then Mach 10.3. It can’t slow, it’s got a mind of its own, it’s overheating, it’s—

Vapor, a trail of wreckage in the sky. Less an airplane now than the remnants of a meteor caught in the low atmosphere.

And then, into some roadside restaurant, stumbles a shaken, but apparently alive, Pete “Maverick” Mitchell. Mav is then ordered by the drone-happy Admiral Cain (Ed Harris)—who wants to bludgeon to death the program that Mav is able to do so well—to report to Top Gun, where he not only, as I mentioned above, is able to make peace with all that ails his soul, but also replays the events of the greatest, and worst, moments of his life, moments we saw in the first film. Beach sports in the hazy gloaming? Check. Motorcycle rides with a beautiful woman? Check. Dangerous airplay that smashes through the hard deck and ends up getting people sent to the hospital? Check.

It’s almost like Mav, rather than miraculously surviving an ejection at 7,000 or so miles per hour, perished in that test flight and before he could head on up to fighter-pilot heaven he had to work through his own personal purgatory. All I’m saying is that when Hangman saves Mav’s bacon in the final dogfight while uttering the line “This is your savior speaking” in the tone of voice that can only be labeled “pilot”—memorably described by Tom Wolfe in The Right Stuff as a lineal descendant of “the drawl of the most righteous of all the possessors of the right stuff: Chuck Yeager”—I don’t think the invocation of the almighty is entirely metaphorical.

And this is what, really, gives Top Gun: Maverick its power. Despite being almost aggressively generic in terms of plotting it is also deeply personal, a window into the regrets of one of pop cinema’s legendarily beloved characters. Maverick is at peace now. He has been to the danger zone and back. He can rest.