Keep up with your favorite Bulwark writers—sign up for a FREE daily dose of sanity emailed right to your inbox. Sign up here.
Support The Bulwark and subscribe today.
Join Now
2024

One is the country under his leadership, the other under Biden’s. Both visions are bleak and completely detached from reality.
by Bill Lueders
Former U.S. President Donald Trump arrives for an event at his Mar-a-Lago home on November 15, 2022 in Palm Beach, Florida. Trump announced that he was seeking another term in office and officially launched his 2024 presidential campaign. (Photo by Joe Raedle/Getty Images)
Share on Facebook Share on Twitter Share via email Print

Last week, in announcing his candidacy for the presidency, Donald Trump presented his vision of two Americas. Both are entirely fictitious.

Vision number one is the utopia that exists whenever Trump is in power or is about to reclaim it. In a part of his address that was decidedly too articulate to have been ad libbed, Trump remembered how it used to be:

Two years ago, when I left office, the United States stood ready for its golden age. Our nation was at the pinnacle of power, prosperity, and prestige, towering above all rivals, vanquishing all enemies, and striding into the future confident and so strong. In four short years, everybody was doing great: men, women, African Americans, Asian Americans, Hispanic Americans—everybody was thriving like never before.

Vision number two, as elucidated by Trump, was of America under Joe Biden:

But now we are a nation in decline. We are a failing nation. For millions of Americans, the past two years under Joe Biden have been a time of pain, hardship, anxiety and despair. . . . Hundreds of thousands of pounds of deadly drugs, including very lethal fentanyl, are flooding across the now open and totally porous southern border. The blood-soaked streets of our once-great cities are cesspools of violent crimes. . . . The United States has been embarrassed, humiliated, and weakened for all to see.

This will be Trump’s sales pitch heading into the 2024 election: Where there was once nothing but prosperity and competence, there is now only chaos and ruin. “In two years, the Biden administration has destroyed the U.S. economy, just destroyed it,” Trump assured his audience, a few minutes before Fox News couldn’t stand it anymore and broke away from live coverage of his address. “With victory, we will again build the greatest economy ever.”

As usual, Trump buttressed his case with a seemingly endless stream of false assertions.

He claimed his administration had “completed the wall” he promised Mexico would pay for; it didn’t come close. He said his administration, which lasted four years, was actually as long as it felt like: “I’ve gone decades, decades without a war. The first president to do it for that long a period.” He boasted that there were “no Islamic attacks, terrorist attacks, during the Trump administration” that he could recall, which means he forgot about eight people run over and killed in New York City in 2017, which his Justice Department deemed a terror attack. He claimed that, under Biden, the U.S. left behind $85 billion of military equipment in Afghanistan. It was more like $7 billion.

Trump said the Biden administration “virtually drained” the nation’s Strategic Petroleum Reserve, which he had “built up”; it hasn’t and he didn’t. He said his administration was the first ever to get tariff revenue from China—which is true only if you don’t count the annual average of $12.3 billion in custom duties received from 2007 to 2016, according to the U.S. International Trade Commission DataWeb.

Rather than make hay about how inflation is at its highest level in 40 years, Trump declared it was “the highest in over 50 years.” He claimed gasoline was now costing “five, six, seven and even eight dollars” a gallon and about to “go really bad.” The national average, on the day he spoke, was $3.76. He even offered this bit of holiday cheer: “Good luck getting a turkey for Thanksgiving. Number one, you won’t get it, and if you do, you’re gonna pay three to four times more than you paid last year.” The latest USDA report says the price of a whole frozen turkey is up about 6 percent from last year.

Amid this display of pure derangement, Trump challenged Biden’s mental acuity, saying, “There are a lot of bad things, like going to Idaho and saying ‘Welcome to the state of Florida, I really love it.’” No such thing ever occurred; the closest wording to Trump’s invented gaffe appears to be the headline of a satirical article that was posted in 2020.

Trump, in describing the hellscape that Biden has wrought, cleverly accounted for the fact that most Americans have no idea it is happening, on account of it being imaginary:

The citizens of our country have not yet realized the full extent and gravity of the pain our nation is going through, and the total effect of the suffering is just starting to take hold. They don’t quite feel it yet. But they will very soon. I have no doubt that, by 2024, it will sadly be much worse, and they will see much more clearly what happened and what is happening to our country.

In his push to regain power, Trump is actively rooting for the nation to fail and for people to suffer. That is the vision of America he wants to prevail.

There is nothing new or noteworthy about the fact that Trump is a shameless liar or that he practices the politics of mass delusion. But what his campaign kickoff speech showed anew is that he is also extraordinarily shrewd. He knows that if he can get two-thirds of registered Republican voters to believe Biden’s 2020 election was illegitimate based on absolutely no evidence, then he surely can convince a majority of the electorate, against all evidence, that he was a capable president and that Joe Biden is, comparatively, less fit.

In the real world, Trump was a bumbling fool who embarrassed the nation regularly on the global stage, to the point where other world leaders made fun of him among themselves. He badly mishandled the COVID-19 pandemic, touting quack cures, spouting unfounded optimism, and allowing hundreds of thousands of preventable deaths. He was impeached twice, including for his role in fomenting the January 6th riot at the U.S. Capitol.

Biden, meanwhile, has passed several major pieces of legislation to reduce poverty, fight climate change, lower prescription drug costs, reinvigorate the economy, and attain the lowest unemployment rate in 50 years—which, for some reason, he doesn’t feel the need to lie about and claim it’s been, say, 60 years.

While Biden by no means has a perfect record, there is in fact a night-and-day difference between him and Trump. It is a difference between capability and incompetence, decency and degeneracy, achievement and grievance. And still, Trump manages to stun with the depth of his hypocrisy.

After years of overt efforts on Trump’s part to politicize the Justice Department, including firing Jeff Sessions for not being sufficiently compliant, here is what Trump posted Sunday on his failing social media platform, Truth Social, following Attorney General Merrick Garland’s appointment of a special counsel to oversee the ongoing investigations into Trump’s attempted coup and theft of classified documents:

Our Country has never seen a Weaponized “Justice” Department, and FBI, like they are witnessing right now. They are doing everything they can, much of it unlawful, to protect an incompetent and corrupt President, and his drug addicted criminal son. The system is Tainted and Rigged, just like our Elections are Tainted and Rigged, and just like our Border is for sale to the highest bidder, OPEN, and a disgrace to humanity. In the meantime, our Country is failing at a level never seen before!!!

A few minutes later, he followed this up with a post calling Jack Smith, the highly respected  former career Justice Department prosecutor and former chief prosecutor for the special court in The Hague, “a Radical Left Prosecutor, who is totally controlled by President Obama and his former A.G., Eric Holder.”

Biden, meanwhile, had this to say about this development: nothing. His press secretary, Karine Jean-Pierre, noted that the president’s office was, quite properly, “not given advance notice” of this development.

This is the actual contrast between the president we have and the president he defeated. It is every bit as stark as the one that Trump imagines. 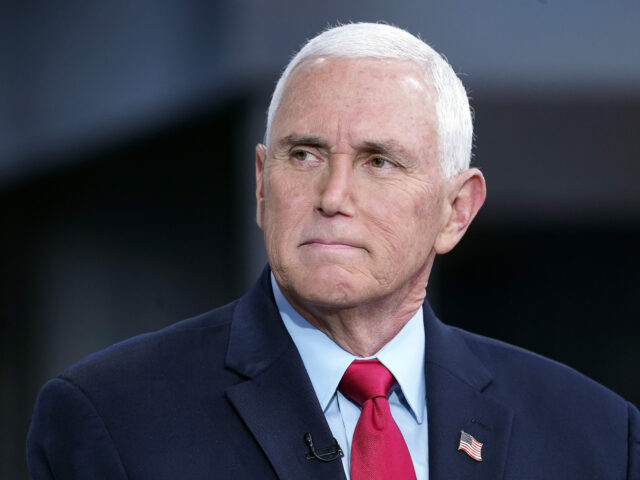 Mike Pence’s Brother Wants Him to Run in 2024