He had the wrong goals—and didn’t even achieve them.
by Mona Charen
US President Donald Trump (L) and China's President Xi Jinping leave a business leaders event at the Great Hall of the People in Beijing on November 9, 2017. (Photo credit: NICOLAS ASFOURI/AFP via Getty Images)
Share on Facebook Share on Twitter Share via email Print

One thing that Republicans persuaded themselves of during the past five years has just come a cropper. It was the belief that whatever else Trump may have said or done, he sure was right about China.

No, he was as wrong as could be on China. Let’s count the ways.

One: Trump’s entire conception of the China challenge was fallacious. Trump thought the problem China posed was that it sold us too many things, resulting in a bilateral “trade deficit” which meant that China was “winning” and we were “losing.” Trump clung to this misconception despite repeated efforts by advisors like Gary Cohn to disabuse him. “I happen to be a tariff person because I’m a smart person, OK?” Trump told the Wall Street Journal. “We have been ripped off so badly by people coming in and stealing our wealth.”

While it is true that some industries lost jobs to Chinese competition over the past two decades, it is also true that other industries gained jobs due to trade with China and other countries, and lower-income consumers were particularly enriched by the abundance of inexpensive goods China and others supplied. So were manufacturers who were able to use less expensive Chinese imports. One in five American jobs is devoted to exports, which often rely on imported components.

Two: Trump focused exclusively on one figure, the trade deficit. He wailed that the trade deficit with China amounted to “rape” and promised that under his “America First” leadership, we would “fight for America’s blue-collar workers.” Economists nearly unanimously consider the trade deficit to be a useless statistic for many reasons, including: 1) a trade deficit reflects the fact that Americans have lots of money to spend; 2) it fails to consider that when China sells us goods and we pay in dollars, those dollars come back to us in the form of capital investment; 3) it’s super complicated to figure out bi-lateral balances of trade because so much trade in the 21st century involves multiple countries; and 4) trade deficits are associated with economic growth, not decline.

So, Trump was wrong about trade deals being bad for America and wrong about his own ability to make a dent in the trade deficit (which doesn’t matter anyway). Under his leadership, the U.S. trade deficit was the largest in a decade—a failure, by Trump’s lights.

The data are also now in on Trump’s own “momentous” 2020 trade deal with China. As part of his strategy to get this supposedly history-making deal, Trump had imposed tariffs (taxes) on $200 billion worth of Chinese imports. China retaliated with tariffs on $110 billion in American products, particularly targeting farmers. Trump incessantly claimed that China was paying those tariffs—everything Trump utters should be considered false until proven otherwise—but as a new report for the Petersen Institute for International Economics underlines, that was untrue. Trump’s import taxes were paid entirely by American businesses and consumers. This brought the Treasury $66 billion, almost exactly the amount Trump paid out to U.S. farmers to compensate them for lost exports. Had the trade war never started, the PIIE estimates, U.S. exports to China would have been nearly 20 percent higher in 2020.

The tit-for-tat tariffs continued throughout the Trump presidency until the great 2020 trade deal negotiated with his “very, very good friend Xi Jinping.” The deal, Trump blustered, was “incredible. . . one of the largest deals ever.”

The actual results? It was a flop. Trump said the Chinese government would remove its tariffs. They didn’t. Trump said they would buy $200 billion in U.S.-manufactured goods. They purchased only a little more than half of that, which did not equal U.S. exports to China from before the trade war. As trade analyst Chad Bown concludes: “Today the only undisputed ‘historical’ aspect of that agreement is its failure.”

Three: If Trump had been halfway literate about economics, he would have seized upon the golden opportunity available at the start of his term to enhance U.S. exports and rein in China—the Transpacific Partnership Agreement. As I wrote in 2020:

Standing alone, the United States represents about 24 percent of the world economy. Together with the allies who signed the TPP—Australia, New Zealand, Japan, Malaysia, Singapore, Vietnam, Brunei, Canada, Mexico, Chile, and Peru—the trading bloc would have represented 40 percent of the world’s GDP. Though it isn’t clear that Trump knew this—he seemed confused about it during the debates—the TPP did not include China and would have made the free Pacific nations a bulwark against China’s unfair practices. We would have called the tune.

Instead, one of Trump’s first acts was to withdraw from the TPP. Sadly, the Democratic party has also abandoned free trade, and in deference to his left flank, President Biden has done little to reverse the protectionism of his predecessor. This is especially damaging at a time of rising inflation, when cutting tariffs is one of the only weapons in the president’s arsenal.

None of this is to say that we shouldn’t negotiate with China to curb their unfair trade practices, only that the ideal way to do so is with allies who share our values. In any case, the emphasis on trade misses the point: China is a bad international actor in many ways, and frankly, when you consider Hong Kong and Taiwan and the export of surveillance technology to brutal dictatorships and the Uighurs and the alliance with Russia, well, trade is pretty far down on the list of sins.

Trump’s assumption that trade deficits are a scorecard in a contest between countries was wrong. And even by that flawed metric, he failed. Moreover, his efforts to strong-arm the Chinese into buying more American products after a trade war also flopped. While the pandemic certainly affected commerce throughout the world, and while there were some aspects of the deal that weren’t flawed even if they’ve been ineffective (like demanding more intellectual property protections), the whole experiment in confronting China one-on-one with trade sanctions has been an expensive blunder. (To say nothing of the folly of imposing tariffs on allies like Canada!)

Four: Let’s not forget the strategic and moral fiasco. Obsessed with his trade deal, Trump spent the early months of the pandemic downplaying the virus and praising Xi’s “transparent” leadership. On February 7, 2020, for example, Trump said of Xi: “He is strong, sharp and powerfully focused on leading the counterattack on the coronavirus. He feels they are doing very well, even building hospitals in a matter of only days. Nothing is easy, but he will be successful.” Later, he would pivot to decrying the “China virus.”

Also in the name of negotiating his grand bargain with Xi, Trump declined to impose sanctions on China for its treatment of Uighur minorities. As he explained to Axios, “Well, we were in the middle of a major trade deal.” Trump had earlier signaled his approval of China’s concentration camps, telling Xi that he was doing “exactly the right thing.” At another meeting recounted in John Bolton’s memoir, Trump asked Xi to please buy more American farm products so that Trump could win the 2020 election. That’s quite a long way from his absurd 2021 boast that “We believe in standing up to China, shutting down outsourcing, bringing back our factories and supply chains, and ensuring that America, not China, dominates the future of the world.”

It’s all rot. Another case in point—remember the Foxconn deal? Announced to great fanfare in 2017 at the White House,Trump called it the “eighth wonder of the world.” The deal with the Taiwanese company was supposed to provide jobs for 13,000 in Mt. Pleasant, Wisconsin. Follow-up: Foxconn is drastically reducing its presence. There may be jobs for 1,454 workers. Maybe.

The questions for those serious thinkers who maintain that Trump put us on the right track vis-à-vis China is: Which parts do you suggest we continue: The high taxes? The failure to secure more exports? The alienation of allies? The farm subsidies? Or the moral abdication? 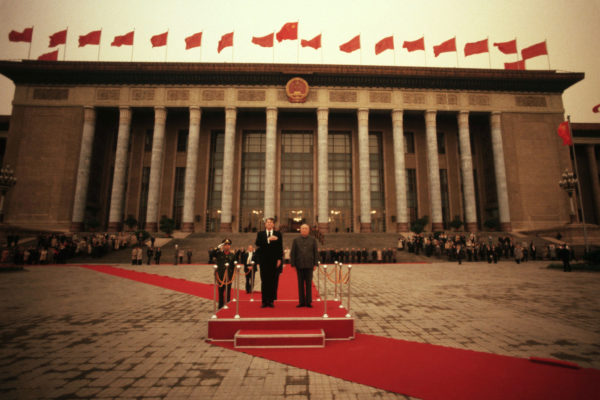