This is a review of Scream (2022), so if you’re worried about spoilers you should read it after you see the film. I try to avoid most of them, but I don’t really know what qualifies as a spoiler anymore.

Scream is both the first and fifth film in the Scream series, which makes sense in a way. As is discussed in the movie, this isn’t a sequel but a “requel,” an effort to reboot the franchise by introducing new lead characters while giving us the familiarity of old favorites. (I prefer the term “soft reboot” to “requel,” which I don’t think I’ve ever actually heard before, but that’s neither here nor there.) Think Halloween, which is both the first and the eleventh film in the Halloweenfranchise. (Halloween is also the ninth film in the Halloween franchise, but that was a pure reboot rather than a soft reboot, so it doesn’t really count for these purposes. Pease keep up.)

The Scream series is always at its best when it is serving as both a comment on slasher films—the genre that includes Halloween, A Nightmare on Elm Street, Friday the 13th, I Know What You Did Last Summer, and others—and a pure slasher film itself. Wes Craven (who directed the first four entries in the series and died in 2015) and Kevin Williamson (who wrote three of the previous entries, but not this one) understood the importance of letting the audience have their cake (shocking violence, repeated jump scares) and eat it too (allowing them to smugly stay above the action by pretending this was as much an academic exercise as an exercise in cheap thrills). And the new Scream is nothing if not smug, its largest idea being “fandom is toxic.”

It is appropriate to use a recycled idea for a soft reboot: fandom has often been toxic in the Scream movies. Toxic horror fans well aware of all the “rules” of horror movies were the killers in the original. Toxic horror fans hoping to earn viral social media fame drive the action in the fourth film. And toxic fans in this film are mad that Rian Johnson has ruined the Stab franchise—the franchise within a franchise of the Scream movies—by refusing to listen to the “true fans.”

Seriously: there’s a barely disguised riff on the reaction to The Last Jedi in this film that, weirdly, fails the Toxic Fan Ideological Turing Test. The reddit and 4chan trolls weren’t mad at Johnson for ignoring the characters from the original trilogy, as Scream (2022) posits, they were mad at him for making Luke a sad-sack loser.

(For the record: this was a dumb reason to hate The Last Jedi, as the best thing about it was sad-sack Luke. Better reasons to hate The Last Jedi are the casino planet excursion and the low-speed Bronco space chase and Leia Poppins and the fact that it should have ended on a cliffhanger in the throne room rather than with the Force-sensitive Broom Boy. But I digress.) 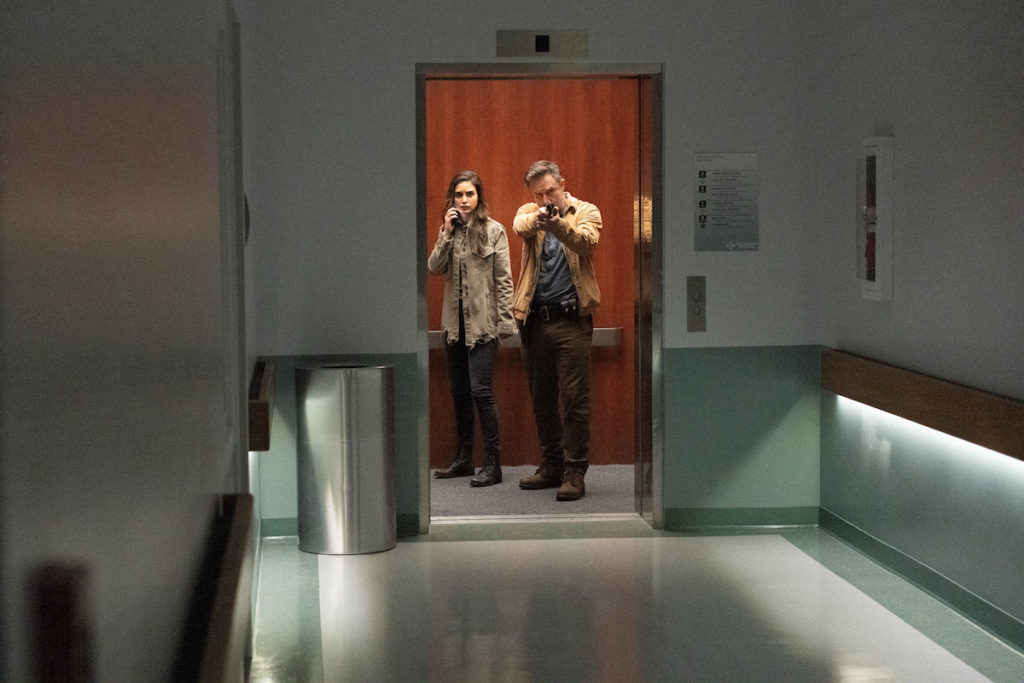 I’m trying to avoid discussing plot points because these movies are best watched without any real preconceptions; you want to let the whodunit unfold, even if the mystery is not only formulaic but also explained out loud within the text of the movie. I will say that, as a slasher-qua-slasher, it is quite effective, using common tropes like “what’s behind this door?” or “swelling strings leading to nothing happening before something still doesn’t happen before finally that thing you’re waiting for doesn’t happen yet again and then bam it happens.” Love that trick, and it papers over the constant, knowing accusations traded by the film’s new set of teenaged friends that each of them is the killer.

David Arquette has long been the joke of the series; his Dewey Riley is a goofball and frequently the punchline. But of all the returning characters he has aged the best, transforming from an awkward, overmatched dope into a grizzled fuckup with steely nerves. Neve Campbell radiates powerful “Don’t mess with Mom” energy as eternal Final Girl Sidney Prescott, while Courtney Cox feels just a hair off. Maybe it’s just weird to see someone actually make it out of Woodsboro successfully.

There’s a lot to say about the film’s final act, and I don’t want to discuss what happens now; maybe in a couple of weeks once everyone’s had a chance to see the movie in theaters. But the finale of this film explicitly calls to mind the finale of another (non-Scream) movie and there’s an unexpected return of a character long since passed that is among the more morally confused elements I’ve ever seen in a film of this sort. With any luck, the teens of Scream 666 will have a chance to discuss these elements after seeing how Stab 9 successfully requels the franchise.