Congress should be thinking about how to deal with Russia beyond the war in Ukraine.
by Shay Khatiri
A Russian flag flies next to the U.S. embassy building in Moscow on December 7, 2021, on a snowy day. (Photo by Alexander NEMENOV / AFP) (Photo by ALEXANDER NEMENOV/AFP via Getty Images)
Share on Facebook Share on Twitter Share via email Print

With the war in Ukraine, the Biden administration has finally accepted that Russia is a problem, and that the U.S. government needs to develop strategies to weaken Vladimir Putin’s regime from within and without. Once the war is over—or if a stalemate is reached—it will be tempting to delude ourselves into thinking that Putin has learned his lesson and will behave himself. More likely, Putin will learn how to be aggressive more successfully next time. What the United States needs therefore is not just a strategy to make sure Russia loses this war but a strategy to ensure that, in the long run, it is diminished as a threat to the United States and its allies and interests. This requires strengthening America’s defenses, exacerbating the internal problems Putin faces, and blocking his access to funds and military technology and materials.

First and foremost, Russia needs to be contained militarily. Congress needs to restore conventional deterrence in Europe, which means paying for a military large, capable, and ready enough to prevent Russian aggression. American prosperity requires a stable, prosperous Europe, which requires a strong, democratic Ukraine, which in turn requires American support not just in the present crisis, but as long as its independence isn’t recognized in Moscow. Step one: Dismiss the administration’s ludicrous budget requests. Step two: Help develop the Ukrainian military, which has proven to be an effective first line of defense.

Deterring Russia and supporting Ukraine will necessitate better procurement plans. The war in Ukraine has exposed the embarrassing production capacity of the American military industrial base. The Ukrainians used up to 500 Javelin anti-tank missiles per day in February and March. Lockheed Martin currently produces 2,100 Javelins per year. Its CEO pledged to increase production to 4,000 a year—still too low a rate—but added that this increase will take two years. The situation is even worse for the Stinger missiles that have denied superiority to the Russian air force and have not been procured since 2003. The Department of Defense simply lacks the industrial capacity it needs to deter Russia and China or support our or an ally’s military during a long war.

On the other end of the spectrum from man-portable weapons like Javelins and Stingers sits the American nuclear triad. The United States needs to accelerate the modernization of its nuclear delivery capabilities. A modernization program is already underway, but the new systems will not come online until 2027. For the systems that could be delivered at an earlier date if given more resources, such as the nuclear-capable F-35 family of aircraft, a program the Europeans are also participants in, Congress needs to allocate higher funding to narrow the time gap.

Russia’s nuclear arsenal is numerically superior to America’s. Russia’s stockpile of theater weapons is growing. It has also developed some exotic nuclear weapons that should concern everybody, so it is important to deter Russia’s use of nuclear weapons during wartime and convince its leadership to retire some of those systems.

New theater nuclear weapons and enhancing delivery capabilities, including through forward deployment of weapons closer to Russia, could convince Russia to retire some of its weapons. This was the essence of Ronald Reagan’s “dual-track” diplomacy that led to the Intermediate-range Nuclear Forces Treaty. Certainly, this will be trickier this time given that there is a third player to mind: China. A more formidable triad would give the United States leverage in negotiating a trilateral arms control agreement with Russia and China and cover Russian weapons excluded from the New Strategic Arms Reduction Treaty (New START). The administration gave up a lot of leverage by agreeing to a full five-year extension of New START in early 2021, and as both China and Russia expand their nuclear capabilities, it will need every advantage it can get if it wants to achieve a future arms control agreement.

Beyond capabilities, geography also matters for deterrence. Finland has already announced its intent to apply for NATO membership with Sweden likely to follow, and membership for the two Nordic countries will no doubt redound to both their benefit and the alliance’s. But no country has ever earned admission to NATO more than Ukraine, and it is essential that Ukraine becomes a member of both NATO and the European Union. This is not merely a symbolic gesture. The Ukrainians’ unsurpassed knowledge of their neighbor’s military, politics, and culture will be a valuable asset to both organizations.

The weaker the Russian military is, the easier it is to deter it from invading its neighbors. Weakening Russia militarily is a twofold proposal. First, it requires primary and secondary sanctions that will permanently cut off Russian access to international financial institutions. This means less economic activity in Russia to support military spending and a much more difficult environment in which to finance a military. Second, primary and secondary sanctions should be shaped to prevent Russian access to military technology and materials used in weaponry. The administration is currently taking the first step in this direction, but it is important that the Congress codifies these policies in law to prevent a future administration from rolling them back. Congressional buy-in will also make the inevitable lobbying efforts to lobby against these restrictions more difficult.

Since 1997, the United States has abided by its pledge not to have permanent bases in former Warsaw Pact countries or deploy its nuclear weapons to their territories. During that time, it took peace and security in Europe for granted, which it can obviously no longer do. That agreement is now null, and the United States needs to ensure that the eastern flank of NATO is safe.

Containing Russia economically is a key to limiting its capacity for aggression. Sanctions cruise through Congress all the time, and they do a great job in exerting economic pressure on a country and diminishing its purchase power, but their record at actually changing states’ behavior is spotty at best. There is more to be done.

Energy is a key to Russia’s wealth, and ending European reliance on Russian energy is crucial but also challenging. Russia will always have an advantage in supplying Europe with gas because of geography. Finding a politically sustainable way to power Europe will depend on finding a consensus energy policy, which in the long run will likely depend less on the policies of governments than on market forces. For now, we can only patch the wound and ask other dictatorships to produce more oil and gas. But reaching a consensus on and adopting a stable energy policy will be a key to sustaining European security.

So will public diplomacy. Since the Cold War, the United States has largely abandoned its practice of making its case to the world, but information operations will be vital in the conflict with Russia and competition with China. Putin and his regime have never been more vulnerable. The United States has proven its intelligence capabilities, but it needs to reinvest in other forms of information operations as well. This includes public diplomacy with the Russian people and Russian speakers in other countries. It requires properly funding the Russian-language programs of Voice of America and Radio Free Europe/Radio Liberty so they can produce more high-quality programs that compete with Russian state media.

Congress must also require the Departments of State, the Treasury, and Justice, as well as the Director of National Intelligence, to work together to find and crack down on Russian offshore corruptions. Isolating Russian oligarchs is key to maintaining the strength and integrity of our own markets, media, and politics, so Putin’s cronies and their families should be denied physical entry into any free country as well as access to their financial sectors.

In recent decades, the U.S. government has increasingly been leaning on non-human methods of intelligence gathering. New technologies have made information gathering easier and cheaper, but there is no substitute for field work and a presence on the ground. An abundance of American agents in Russia would facilitate aid to dissidents and the oppressed political opposition and contacts with people inside the power ministries and the military who could weaken the regime from within.

So long as Russia is an autocracy with thousands of nuclear weapons, it will remain a serious national security threat. Defeat in one war, or even the death of Putin, will not change that. The most responsible course of action is to make sure that Russia is deterred from future aggression until Russia becomes a free, peaceful country.

The Bizarre Russian Prophet Rumored to Have Putin’s Ear

How Putin Conned the American Right 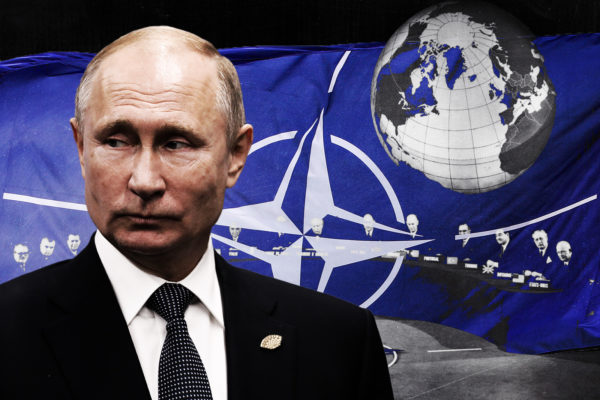 Putin Wants to Break NATO. Republicans Want to Help Him.